Post Two Hundred and Twenty One: The Ties That Bind. 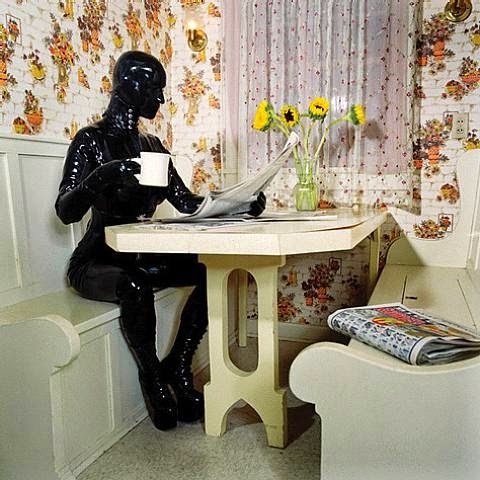 I saw online that a close girlfriend of mine from school was due to be married.

The next night I found myself in a Fetish Club watching two costumed women. They were fervidly circling a seated gentleman in a cyclone snare of knitting wool, and even though off-stage, their unique dramatic indulgences gained them a particularity that distinguished their act from the other kink around them. Their victim was yarn bound from shoulder to knee, nipples popping out like the corners of flattened milk carton spouts. I imagined cutting him free, watching his cocoon fray upon release into an erogenous pom pom. I was lost as spectator, suspended in wonderings of how a young man found himself publicly flogging his wife in stocks, or in another instance, how a man wearing a thong and a traditional Native Indian headdress first experimented, slinging his girlfriend up with rope ties from a roof hook.

After the group dynamics of the more involved patrons were established, and probably after I realised that no-one was going to lay into me with a paddle without my consent, my own self inquiry emerged. I was comfortable there among the ladies in latex, and perhaps even more so among the men dressed as ladies in latex. This place of assumed disrepute seemed to be a place of unparalleled respect and honesty. It appeared to be a joint where partygoers could congregate to escape the repression of that which truly made them feel alive, and their bold and brave pursuit of self actualisation made me wish that mainstream culture could make room for such authentic confidence and adventure.

It was the next morning that I saw online that my mate was getting married. I felt a surge of rejection, and even though I hadn't had much contact with her for many years I was confronted by the realisation that although once close, most of my friends had drifted away. I'd been noticing the special occasions of those that I once deemed dearest pass by not with my own involvement but with guilty mouse clicks through profile pictures and status changes. The internet makes it easy to be a voyeur into other people's lives and not active participants in them. Herein the self discovery lies, of rejecting the path of no resistance; the one in which we wake just to work, scrub our decaying teeth and repeat until death, save for the brief illusory pleasures of youth and conventional asylum. I don't want to rely on the security of established safety nets, even though I might mourn the natural extinction of them. I want to push back at my social networks to see who would really like to share with me the type of life that challenges and inspires. I'd like to see who'll play with me, maybe not with whips and ropes, but with an undertaking of honesty and courage and a commitment to having an endless collection of colourful stories to share. After all, life seems to be a delicate jig around pleasure and pain.