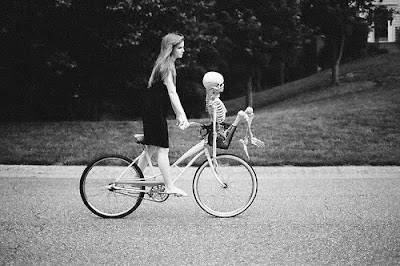 Alright, it's time to take charge. I need to exercise before I end up on my own table. My butt is starting to extend pretty far into my thighs, is that normal? It's all a bit sad really.

A few months ago I borrowed a BMX and rode to work and back every day for a fortnight. It was super fun, partly because I'm still a little kid and also because I am a RETARD and have trouble riding confidently in a straight line. I played this game in which whenever I saw one of those suburb signs I had to ride in between the poles. This is a huge challenge if you overthink your general path positioning and freak the f&*! out. I do this. I do however reward myself with a 'ding ding' of the bell if I make it through without running over dogs, small children or my own feet. You know how it is. And yes, this BMX is black and tough and it has a skeleton on it but it also has a really cool bell.

Alack and alas, the bmx's brakes are really squeeky so I returned it to it's rightful owner. I'm driving my car with some type of shock absorbing lamo problems that I can't be bothered paying for, so I should probably bite the bullet and spend $50 on a new second hand bike. Yes, I need a new bike. I live on a mega hill, so I'm thinking this time that gears are necessary...

I remember when I was about 6, my older sister Deborah tried to make me ride my bike without training wheels down an alley way to get something from the shops. (She'll love that I'm recalling this...)I freaked out because the alley had those bars in the middle to slow people down and I couldn't find the brakes. Instead of being calm and figuring it out I just threw myself off the bike at quite the speed, but somehow went over the handle bars in the procedure. Anyway, I totally ruined the purple catchit shirt I was wearing and split my chin pretty clean open. To make the story even more incriminating for Deb, who was about 12, she put me in a car with a strange man she didn't even know... he saw the accident and told her that he would take me home to my dad.

Who the crumbs was this man, you ask? We never found out, he said he knew my parents but I think he probably wanted to steal me. Dad had no idea who he was. Anyway, Deb kept on riding to the shops and picked herself up some cobblers and life savers and after being dropped off home by this potential pedophile I was sent off with Dad to get 4 stitches in my chin. Stitches in your face are terrifying because you can see all that stuff going on. (If dead people can see what I have to do to them, gah!)

Thanks Deb. What a great big sister! x
Posted by Sarah at 1:11 AM